This article has been written by Carlos Izzo Videla, Buenos Aires, Argentinia. He asked me to host this valuable piece of information here on www.hermocom.com.

I have never met or heard of an owner of a HP200LX who does not have a broken latch problem. I have only seen an original working latch once and it was in a practically unused HP200LX.

The 'latch problem' seems to be, along with the omnipresent and hideous hinge crack and broken battery covers, the most common problem encountered (sooner or later) by all HPLXers. I am, of course, no exception to these (only the last two, fortunately) problems which I personally find difficult to forgive HP's engineers for. Much more so if we take into account the amount of money one of these little marvels went for when they first came into the handheld computer market.

There are a quite a few fixes and/or solutions to the broken latch problem out there and this is just one more of them, just another idea. It takes a bit more time, requires some knowledge/experience in taking apart the HP200LX, manual dexterity and a certain knack for fixing things in general. It involves more risks but, in my opinion, the end result justifies all the trouble.

If you are reading this, chances are that you have already read the previous page. If not, then please do read it, particularly this same section.

I won't go into the details of how to dismantle a HP200LX to fix the latch as it has been thoroughly documented by two very experienced LXers: Daniel Hertrich has done it here and David Sargeant has done it here.

Please do take the time to read what they have to say about taking apart, hacking and repairing a HP200LX, generously sharing their experience with the rest of us.

WHERE I GOT THE IDEA FROM

When I got my HP200LX, one of the the first things I did (I'm a 'it's not yours until you take it apart person') was take it apart and this put me in contact (among other interesting things) with the latch problem. At first I did not see it as a big issue, but in time and with everyday use I eventually came to the conclusion that it was not a good thing to have the latch in that condition with the screen 'open', so to speak.

Or maybe it was just the itch to do something more with my HP200LX ....

So I started looking for a way to get the latch in working condition again. Unfortunately, none of the solutions I found (silicone blob, rubber band, foam, etc.) did the job very well. The latch never closed properly and thus the screen was not secured in it's closed position.

I really hate to say this, but after taking it apart and seeing how the latch was 'supposed' to work, I concluded that HP's design for this latch is really not a good one, to say the least. Certainly not what one is (was?) used to expect from a company such as HP and in something as expensive as a HP200LX.

The 'spring back' force the latch relies upon to stay closed is actually provided by the same thin plastic rods that form the latch's hinge (a horizontal pivot) through a couple of 90º bends at their ends which are held in place and kept from turning along with the pivot when the latch is pushed on.

So every time you push on the latch to open the HP200LX, the thin plastic rod that serves as a hinge is subjected to torsion (certainly not for this type of material) with the end result being that when the plastic reaches it's fatigue limit and breaks, you not only lose the 'spring back' force needed to keep the latch closed but you also lose the hinge the latch pivots on. If I didn't know better, I'd say that it was designed to break after some use.

Which is exactly what it does. ;-/

The problem is then twofold. In order to get the latch working properly again, two things have to be recovered: the latch's 'spring back' force and the hinge the latch pivots on. I think it is the lack of this hinge that keeps the other solutions available from working properly.

Close inspection of a broken latch and it's lodging will show all that I've described above plus one thing I had not noticed before: a small cone shaped protuberance on the surface of the underside of the latch. 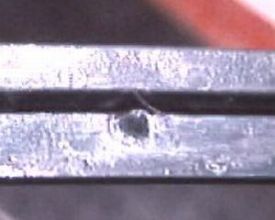 Being most probably the injection point for the mold used to make the latches, it is (by design) right in the centre of the latch and thus in a perfect place to secure a coiled spring in order to give the latch the force needed to remain locked. Curiously enough, when the latch is in place, this little cone shaped protuberance is situated right opposite the centre of a square flat piece of plastic which is part of the upper side of the screen bezel and serves as a perfect point of support for the spring to work against.

Here's a shot showing what it would look like once in place: 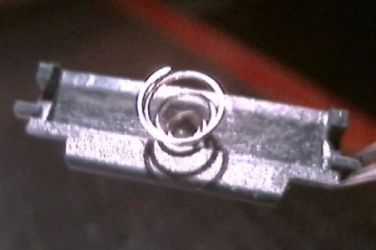 How it ends up will obviously depend on the type of spring you use. I used one of the battery connector springs from the mainboard of a dead Palm III and cut it progressively shorter till I found the right combination of force and radius. You need for it to exert just enough pressure but you don't want it to be so large that it shows outside the bezel or keeps the lid from closing. 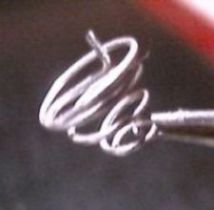 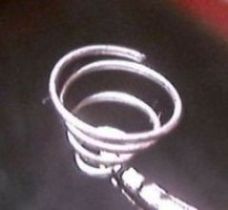 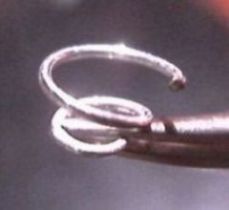 I'd say that most any old electronic appliance using 1.5v AAA batteries can provide you with an adequate spring that, being properly designed for the job, won't break after just 250 cycles. 8-/

Depending on the spring used, you can glue it on to this small 'cone' or try to have it stay in place by means of it's own pressure. I put a small drop of a cyanoacrylate based adhesive (Super Glue, etc.) to help it stay put, especially while I was assembling the lid.

Now, the spring by itself will not solve the latch problem. The lack of a hinge on the latch's horizontal axis for it to pivot on does not allow the catch to hold in place as the whole latch is pushed upwards and not just the part with the catch.

To fix this (actually the trickiest part of this screed) you have to practise some surgery on the latch itself. It is the trickiest part because it is not possible to use just one single (and very easy to align between just two points) piece of plastic or wire to rebuild the hinge: it just won't fit in place due to the existence of two mounting tubes which are used to fix the screen bezel in place.

All these descriptions I am induging in may seem a bit confusing if you haven't taken apart a HP200LX's lid and screen bezel, but with the parts in front of you it all makes sense right away. A look at David and Daniel's thoroughly documented instructions will quickly dissipate any doubts you may have.

The thing is that you have to manually align two separate pieces of plastic or wire along the same axis and fix them in place by melting the plastic using heat or with resin, epoxy or whatever else you can come up with.

I reconstructed the pivot on the latch using a piece of steel wire I had left over from when I made 'Z' type springs to hold down coolers on top of Pentiums with broken ZIF sockets and a combination of heat and resin to glue them in place.

If you are lucky, the end result will look much better than the frankenhatch I was able to come up with. It's damn ugly, but it goes unnoticed once in place and most important, it works quite well.

This is a close up of one of the ends:

Here's a view of the finished frankenhatch. Notice that the wires are not exactly aligned along the same axis (the ideal situation). In this case, it does not seem to affect the way the latch works, probably because they're off by just a bit. As always, ymmv.

Once in place, this is what the fixed latch looks like from the outside. Notice that it sits flush with the rest of the cover/case whether it is open or closed: 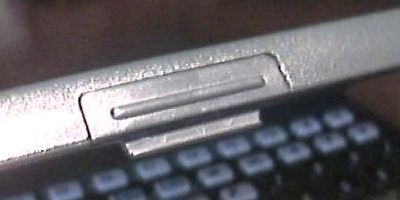 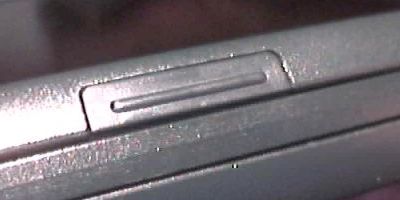 Here you can see the spring once the latch is in place: 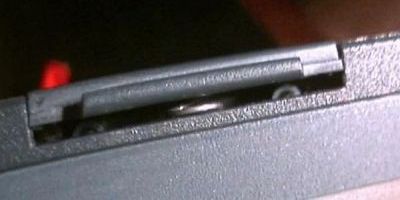